It is said that great minds think alike, and it seems that this phrase has its complete fulfillment with Duchesses Meghan and Kate. When it comes to fashion choices, these two favorite royals have a remarkably similar clothing style. It is no surprise that some likeliness has been spotted since the watchful eyes of the world are on Meg, Kate, and their outfits.

Although each of these duchesses has her unique touch when it comes to style preferences, there are some occasions that Kate and Meg donned some similar ensembles. From the selection of certain similar pieces of clothing to complete numbers, here you have the 15 times the sisters-in-law almost looked like twins. 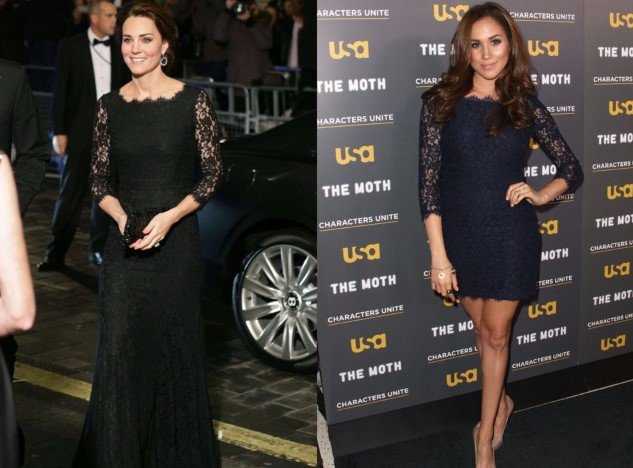 Meg and Kate donned gowns by the same designer but with some slight differences. The Duchess of Sussex opted for a short version of it in navy blue for an event in February 2012. In contrast, her sister-in-law went for a longer version in black two years later in November. 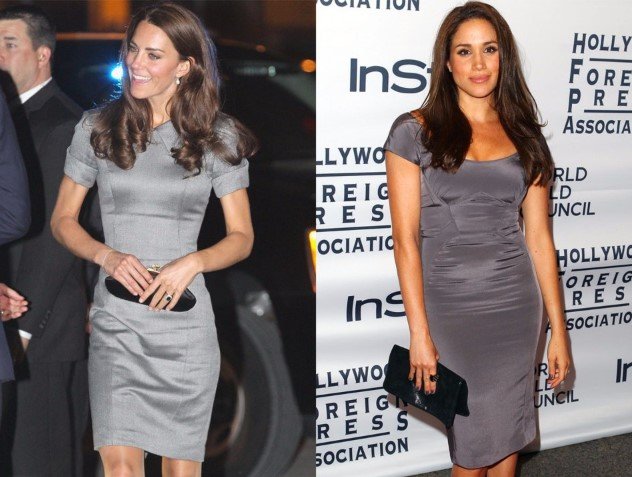 When Kate was recently wedded, she donned a daring gray bodycon made by French fashion designer Catherine Walker when she visited Canada and the USA in 2011. A year later, the 'Suits' actress back then put on a skintight dress with almost exactly the same tone to attend Toronto's International Film Festival in 2012.

13. Getting bolder in red 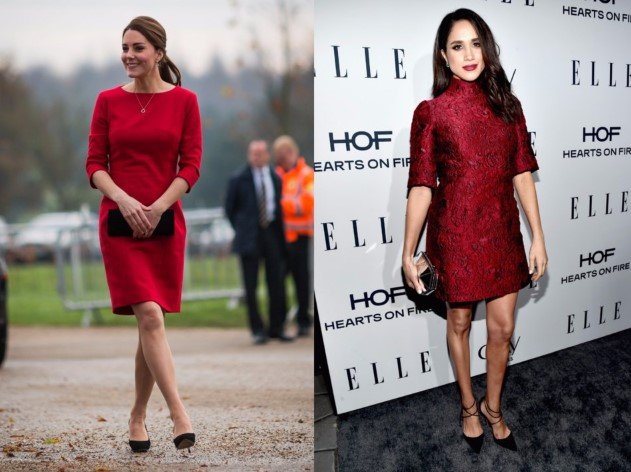 Deep red is an audacious pop of color, and the sisters-in-law experimented with the tone in dresses above the knee. While Markle exhibited a slightly deeper shade in a gown with a high neckline in January 2016, Middleton showed off a lighter red hue for her Katherine Hooker design in November 2014. 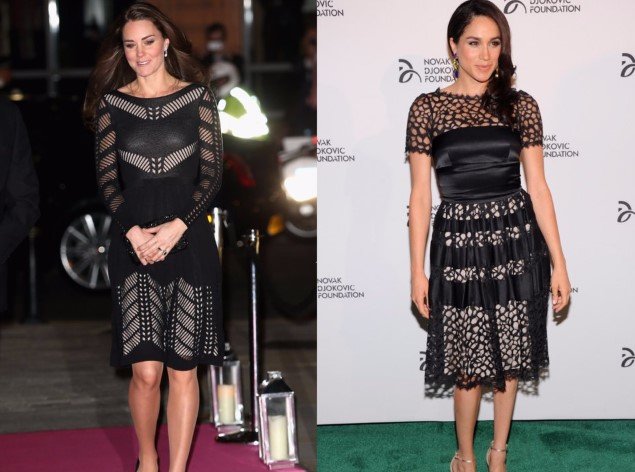 We love the semi-sheer black-and-white numbers that the Duchesses donned with their differences in the necklines and patterns. The mother-of-three dressed in a Temperley London ensemble to attend 2014's Action on Addiction Gala, whereas the mother-to-be wore the dress to go to 2013's Novak Djokovic Foundation dinner. 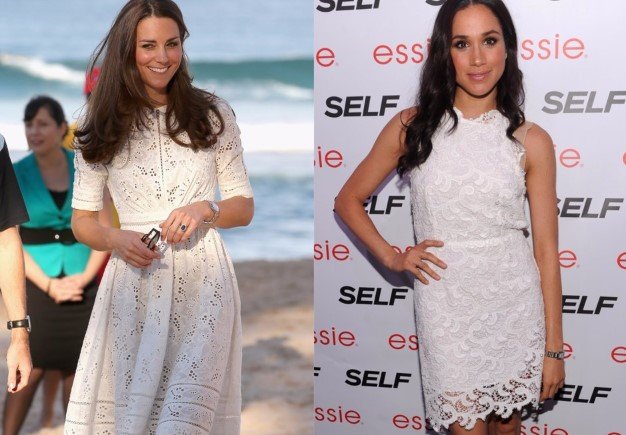 Lace dresses made the Duchesses looked dainty and cute for their respective engagements. Meg needed her white number in a fitted silhouette to go to the red carpet in 2013, while Kate wore hers for 2014's Australia tour. Her choice had a fit-and-flare contour with an off-white shade. 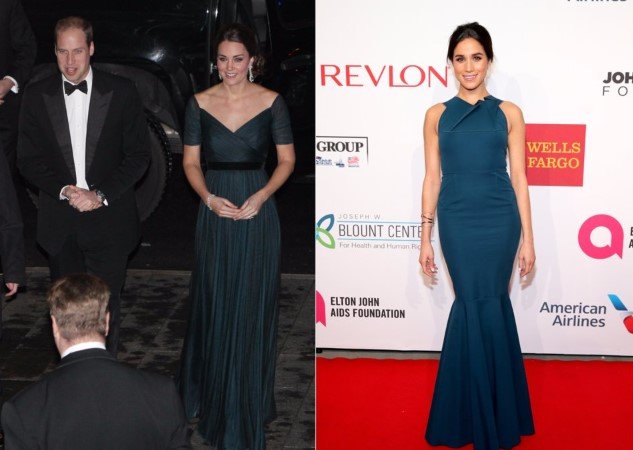 Even for gala events, these two sisters-in-law look identical. Kate wore a teal floor-length dress by Jenny Packham for the 600th Anniversary Gala Benefit for St. Andrews in October 2014. Similarly, Meghan went for a gown in the same shade at Elton John AIDS Foundation's benefit just a few months later in December.

9. The black staple in their closets 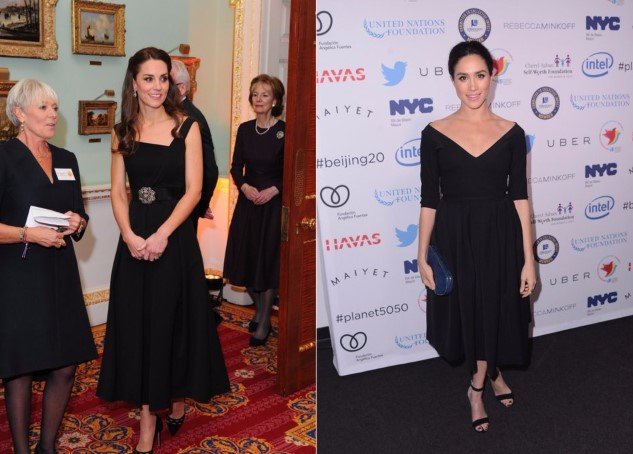 It is said that any girl needs a black dress in her closet, and the sisters-in-law proved that with their classic attire. William's wife dressed in a tea-length gown back in March 2015. Likewise, Harry's spouse showed off hers in November 2016. Nevertheless, the numbers had a few variations in sleeves and necklines. 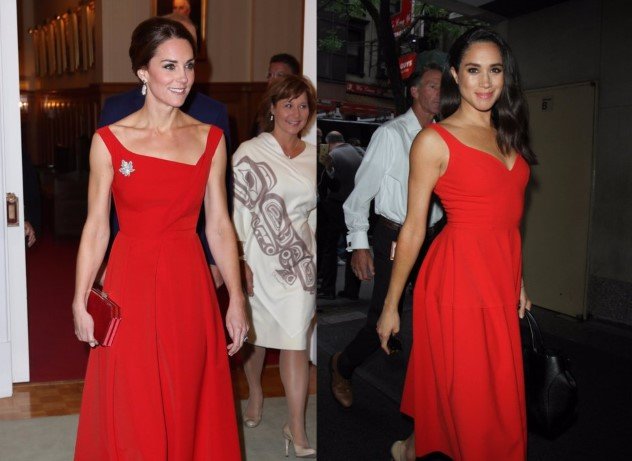 No one can deny the likeliness in the arrays that the female royals donned in 2016. Whereas Markle exhibited it on the 'Today Show' in July, Middleton displayed it during her Canadian royal tour in September. The dresses are almost identical in their bright red color and shape but have a slight variation in the neckline. 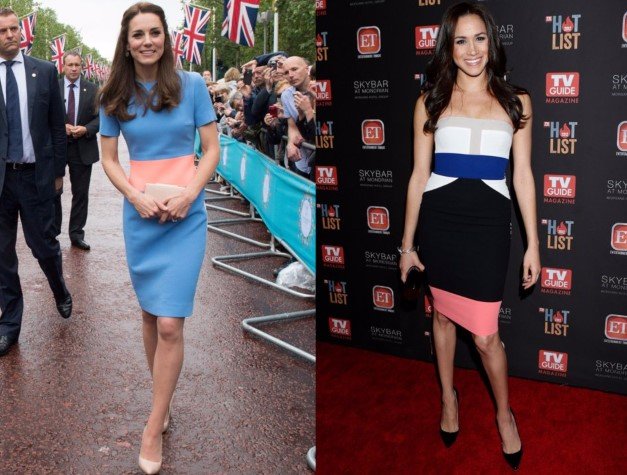 To switch things a bit, the females put on some bright dresses with the color-block trend. Kate's choice for the Queen's birthday celebration in 2016 had a simpler color scheme with only blue and pink, whereas Meghan's had a more elaborate number for her appearance at TV Guide Magazine party in 2012.

6. The casual yet fashionable outfits 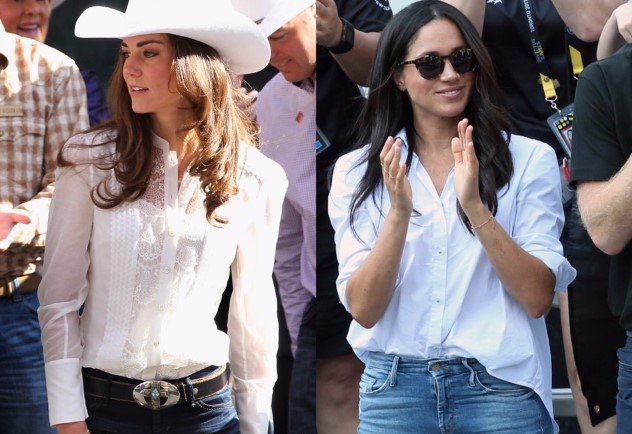 Even with more casual styles, this pair looks very similar; both Duchesses donned button-up blouses and fitted blue jeans. However, Prince George's mother added a twist to her look with a cowgirl hat during her 2011 visit to Canada, while the expectant royal had a more relaxed outfit with a pair of dark sunglasses for her first public appearance with Prince Harry in 2017. 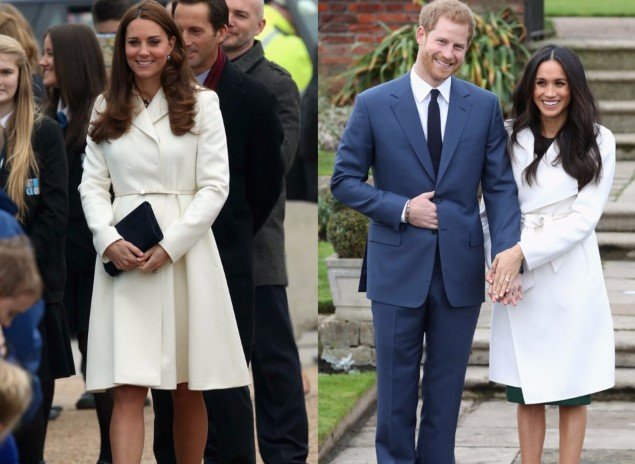 How can we forget Meghan's iconic white wrap coat? The Line the Label piece was the star of the show when the former actress announced her engagement to Harry in November 2017. The apparel also reminded us of the MaxMara one that Catherine donned in February 2015. Can you spot the similarities? 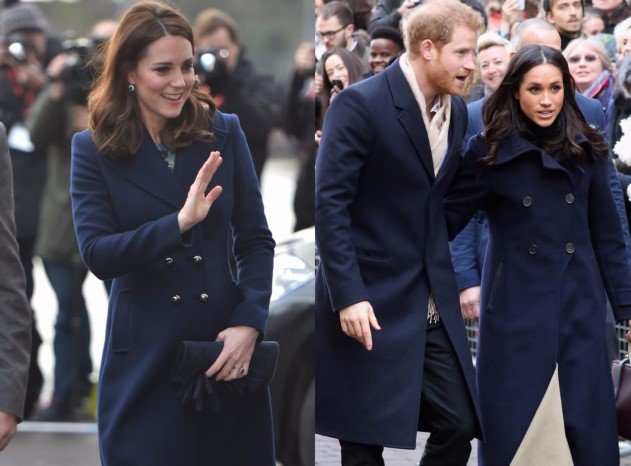 And continuing with coats, the white ones were not the only pieces the Duchesses had in common. When Markle had her first royal engagement in December 2017, she wore a Mackage number in navy blue. Just a couple of days later, in January 2018, Middleton was spotted with a very similar garment in the same shade but by Hobbs. 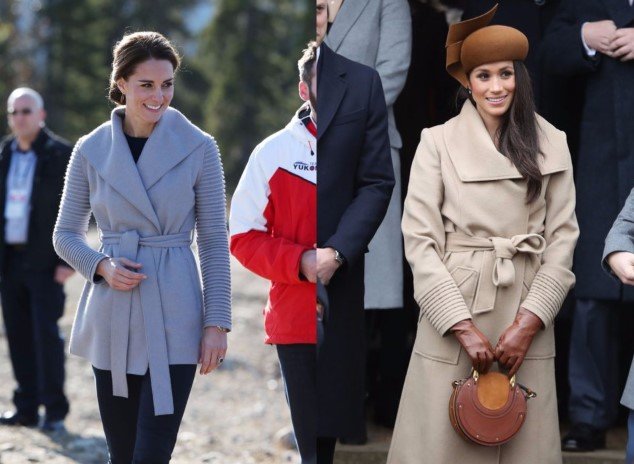 As you can see, these female royals have an impressive collection of coats in common. Meghan and Kate also share some wrap coats by Sentaler with some subtle variations. The former has a long, beige piece that she wore in December 2017, while the latter owns a shorter-length version in gray that she put on in September 2016. 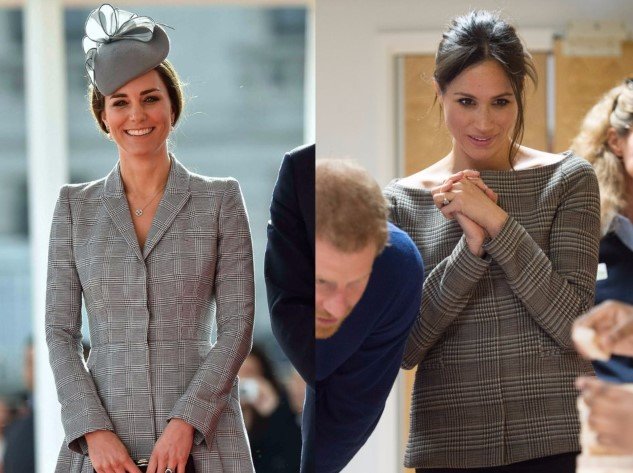 This pattern is widespread among royalty, and the Duchesses also share it in their wardrobes. Prince Louis' mother opted for it in a black-and-white formal dress by Alexander McQueen for an event in 2014. Four years later, the expectant mother donned a checkered off-the-shoulder top in the same shades by Theory. 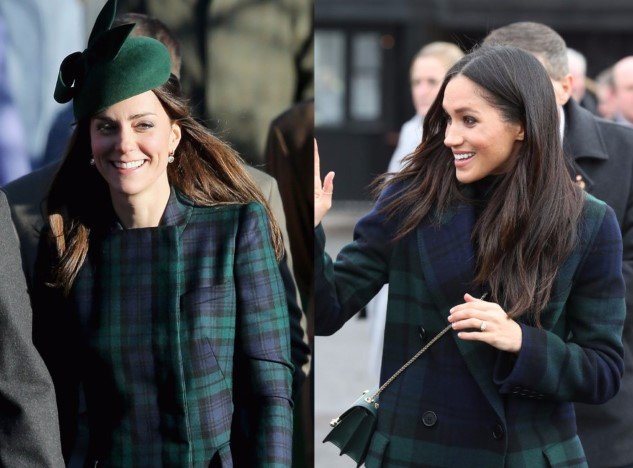 And we could not leave out the classic plaid coats these ladies have as they couldn't look more alike on them. Kate stepped out in her green-and-blue coat dress by McQueen for Christmas in 2013. Several years later in February 2018, Meghan channeled her sis-in-law with her Blueberry number in the same pattern and tones.

Even before being related, Kate Middleton and Meghan Markle had the same vision when it comes to fashion. And now that they are family, we can only expect more looks in common in the years down the road. Which outfit do you think that made them look like twins? Let us know in the comment section down below. Till next time!