HomeInside Buckingham Palace. This is what Queen Elizabeth calls home

Inside Buckingham Palace. This is what Queen Elizabeth calls home

It's not hard to imagine that royal residences are out of this world. And when talking about the ones that belong to the British royalty, most of them have been around for hundreds of years, except one: Buckingham Palace. This dwelling is a relatively new addition but has profound secrets hidden.

Have you heard about the history and peculiarities of this British culture fixture? Few people truly know everything about it, but keep calm! Today, we'll give you a tour around the magnificent Palace, and you'll also get to discover the gripping history that comes with it. This is undoubtedly a place to be explored, so are you ready for a visit? 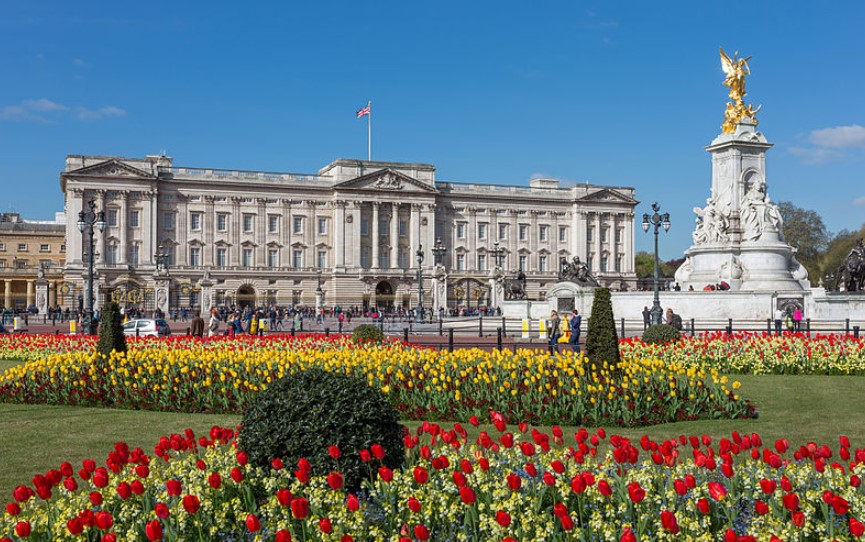 THE OLD DAYS ARE FASCINATING

Buckingham Palace was originally built in 1703 as the home of the 3rd Earl of Mulgrave John Sheffield, who later became the Duke of Buckingham (the residence was then named after the Duke). But it turns out that the property has been in the royal family for over 400 years.

Before 1698, History.com stated that the marshland site along the River Tyburn had a number of owners including the monks of Westminster Abbey and William the Conqueror. It is believed that King James I acquired it to be used as a royal garden before John Sheffield purchased it. 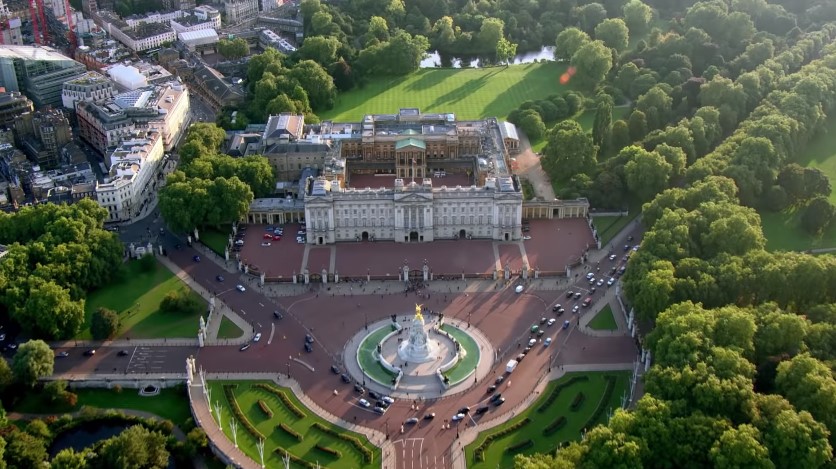 Then, the Duke of Buckingham bought the estate located in the borough of London renowned as Westminster with a pre-existing house in 1698. However, since the building was outdated, the royal decided to replace the construction with the one that stands today.

William Winde and John Fitch designed and built the structure that was finished around 1705. Ever since the construction, it was known as "Buckingham House." In 1761, King George III bought it from Sheffield to be used as his official royal residence along with his wife, Queen Charlotte, and children. Between 1531 and 1837, it was St. James's Place, just a quarter mile from Buckingham. 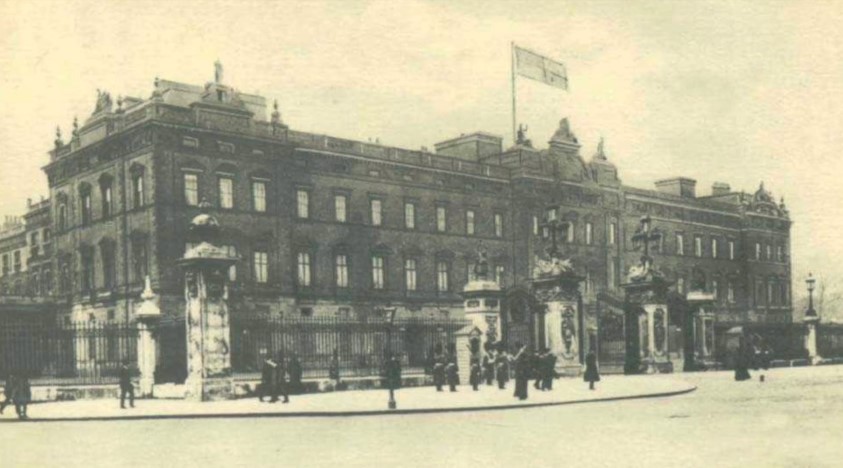 Subsequent to King George III's decision, the building has been the home and administrative headquarter for the Sovereign of England. Although the Palace has suffered several renovations, such as the one during King George IV's time, the original structure has somewhat maintained. 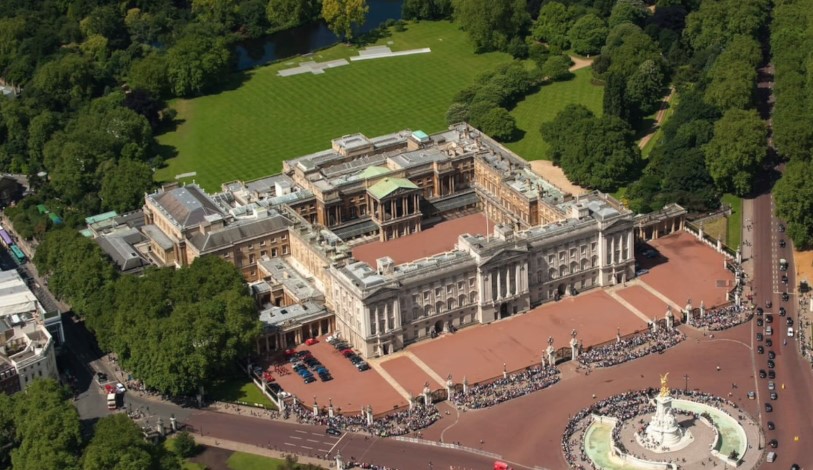 AN IMPORTANT LOCATION FOR HISTORIC MOMENTS

Queen Victoria Became the first monarch to call Buckingham Palace home. In more recent times, Queen Elizabeth II uses the building not only as her residence but also as a site for celebrations and diplomatic meetings. It has thus turned into a memorable place for the British Royal Family.

Just to give you an idea of the foremost events that have taken place there, let us go back in time for a while. In 1851, Queen Victoria greeted the public on the balcony in her first public appearance during the opening of the Great Exhibition, according to Town & Country.

That was the first of many more traditional events that have happened on that balcony. Another example is when Queen Elizabeth waved to the crowds from there during the celebration of her Golden Jubilee in 2002. The Duke and Duchess of Cambridge were also photographed on the balcony during their wedding in April 2011.

And we cannot forget the customary Changing the Guard ceremony. Known as "Guard Mounting," this is a formal service in which sentries are relieved by a new batch from a different regiment. Per tradition, the troop that takes over the guard marches from Wellington Barracks to Buckingham Palace with musical accompaniment every other day at 11 a.m. 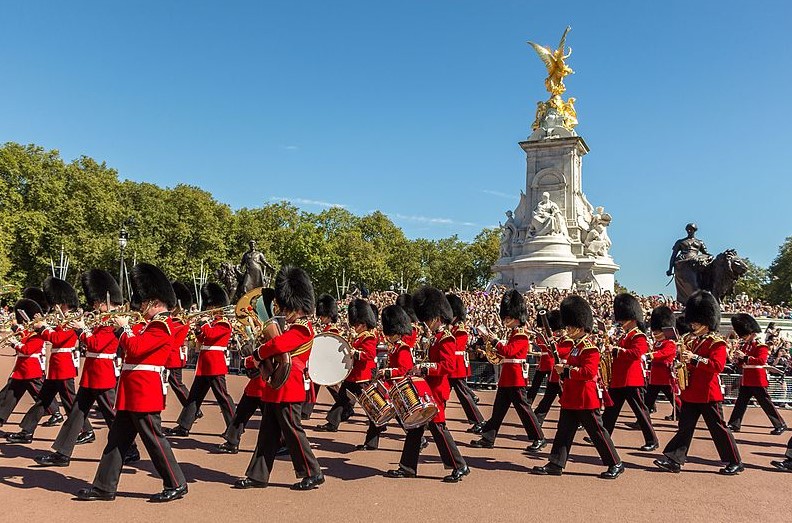 Buckingham Palace is currently a building of 830,000 square feet. In measurements, the residence is 24 meters high, 120 meters deep, and 108 meters long across the front. It holds (you might want to sit down to read this number) nothing less than 775 rooms! Can you believe that?

According to the British Royalty's website, this number entails 188 staff bedrooms, 78 bathrooms, 92 offices, 19 State rooms, and 52 royal and guest bedrooms, only to name a few. The good news is that you can visit 19 of these for ten weeks each summer. 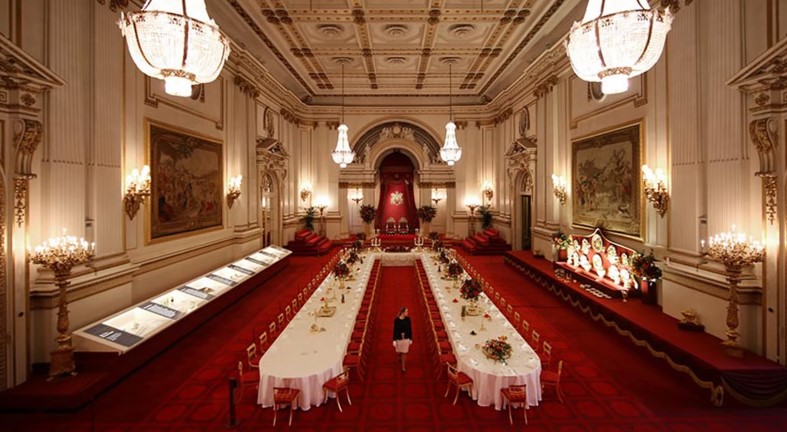 Some of the rooms include the White Drawing Room, Throne Rome, Picture Room, Ballroom, and many more. These lavishly-decorated chambers are all furnished with heirlooms from the Royal Collection. Additionally, you can stop by the Queen's Gallery to gaze at works by Rubens, Canaletto, Vermeer, Dürer, or Duccio.

There are many other masterpieces of the world's greatest artists. Of course, this is only the tip of the iceberg as only a fraction of the royal collection is on display. As The Guardian asserted, the private compilation boasts some jaw-dropping 500,000 prints, 7,000 paintings, and 30,000 drawings and watercolors. 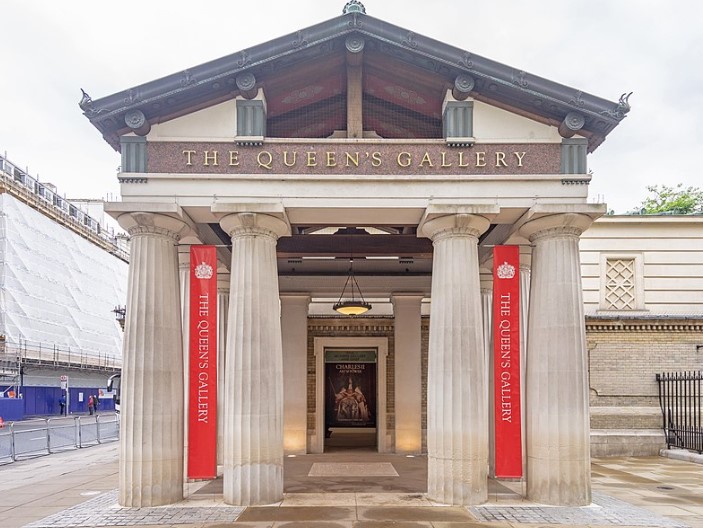 However, the specific content remains a mystery. Additionally, some astounding jewelry of the monarch's collection is exhibited such as Her Majesty's 1820 diamond diadem. Yes, that's the same gorgeous head ornament that frequently appears on coins and stamps.

And one cannot forget to pop in the Royal Mews, one of the finest stables in existence that is responsible for the road trips of the whole blue-blood family, as per The Royal Collection Trust. There, you can take a guided tour to look at the carriage horses or the different types of coaches including a gold one. 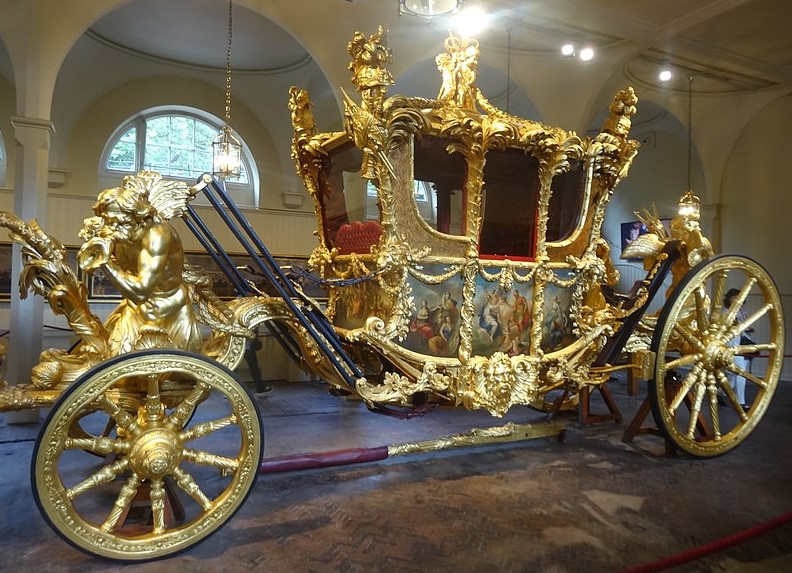 Besides, make sure you keep an eye on clocks once inside. You can definitely go clock-spotting since there are more than 500 throughout the Palace, as per The Royal Collection Trust. No wonder why it's one of the largest collections in the whole world.

We guess the Queen would never have problems getting on time to an engagement! Last but not least, one more curious detail about the royal place is that it also has its own ATM in the basement that prints bills solely for the monarchy. That means no lining up to get some cash! 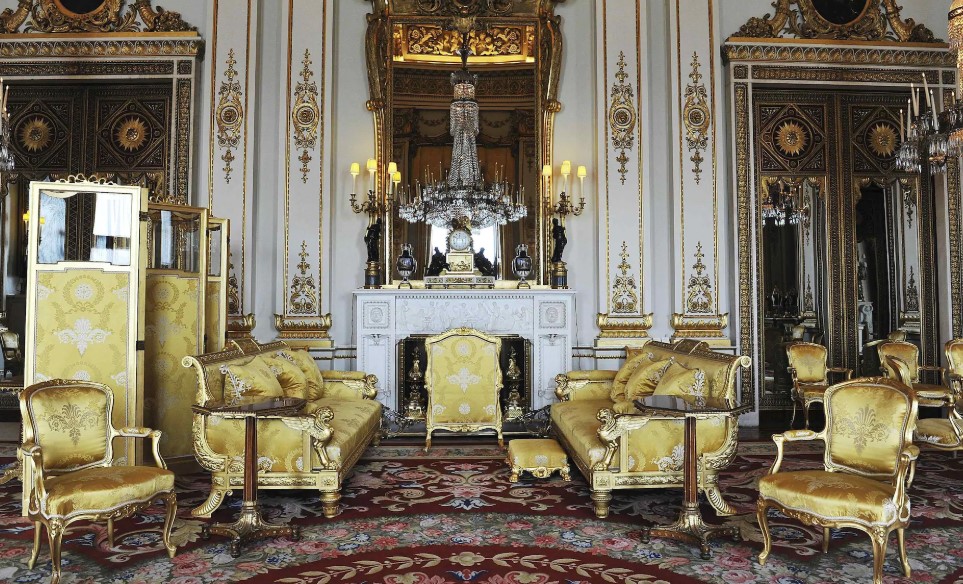 Read more: Royal Family's Revelations About The 'Difficult Relationships' Of Charles And His Father.

If you thought the house itself was overwhelming, wait to see the outside of the estate. One of the most significant areas is the Royal Garden, a 39-acre space with over 350 types of wildflowers, approximately 200 trees, and a 3-acre lake, by Visit London.

Plus, it features the tennis courts where King George VI used to play in the 1930s, a wisteria-clad Summer House, and the famous Waterloo Vase. One of the most stunning sectors is the Rose Garden with more than 25 different varieties of this flower including the Royal William (in honor of the Duke of Cambridge). 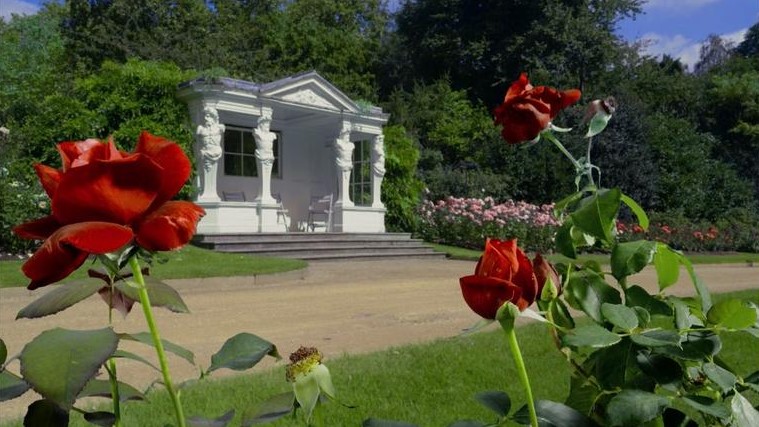 Read also
Apr 24, 2019
Once Time Comes And Queen Elizabeth Is No Longer With Us: Developments That Will Follow

The Memorial Gardens is another area of flowerbeds in a semi-circular design that has exotic plants such as scarlet geraniums and weeping figs. It includes as well a mulberry tree from 1567, the time of James I of England's ruling. Another part any tourist cannot miss out is the Mall, the three-lined road in front of the Palace.

It's flanked by trees and decorated with Union flags during state visits, according to Town & Country. The way is also colored red to create the illusion of a red carpet. The Mall is often seen packed with people during major events such as parades, jubilee celebrations, and royal weddings. 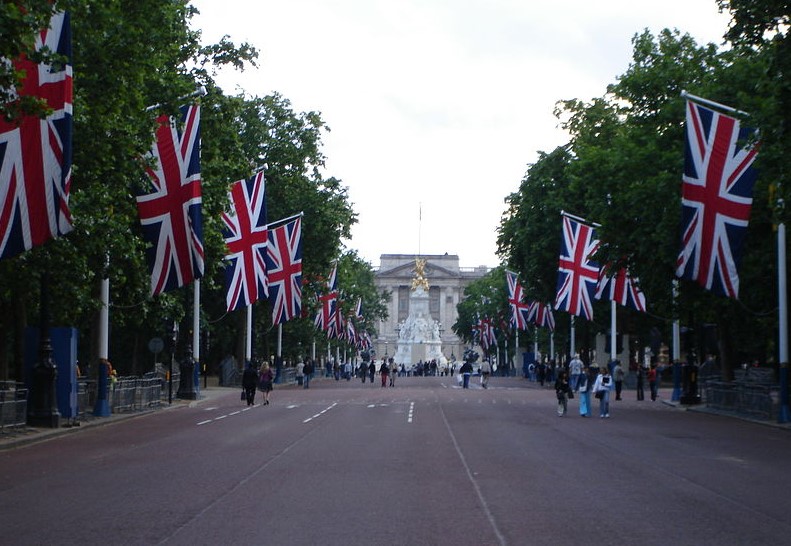 Did you know all these details about Buckingham Palace? Tell us what you think of its intriguing history in the comment section down below. You can also read more articles like this one on our website to stay tuned with all the news about the British Royal Family that we have for you.

May 02, 2019
Things That Hold Queen Elizabeth II and Prince Philip's Marriage Together