HomeThe History Of Royal Debuts At Trooping The Color

The History Of Royal Debuts At Trooping The Color

The annual Trooping the Colour parade is one of the most anticipated events of the year for royal fans! Even though the tradition started forever ago - it really seems like ages since Prince Charles has made his annual appearance, waving dutifully at onlookers from the Buckingham Palace balcony - every royal family member has had to make their debut appearance at the event.

From Prince Charles’s very first carriage ride that happened all the way back in 1951 to Meghan Markle’s very first balcony wave from last year, we’ve compiled a list below to what the first times looked like for every royal. Also, we’ve left a cute little surprise involving one of our favorite princes at the very end! Hint: it has to do with Prince Louis and his dad - and trust us, it’s super adorbs. 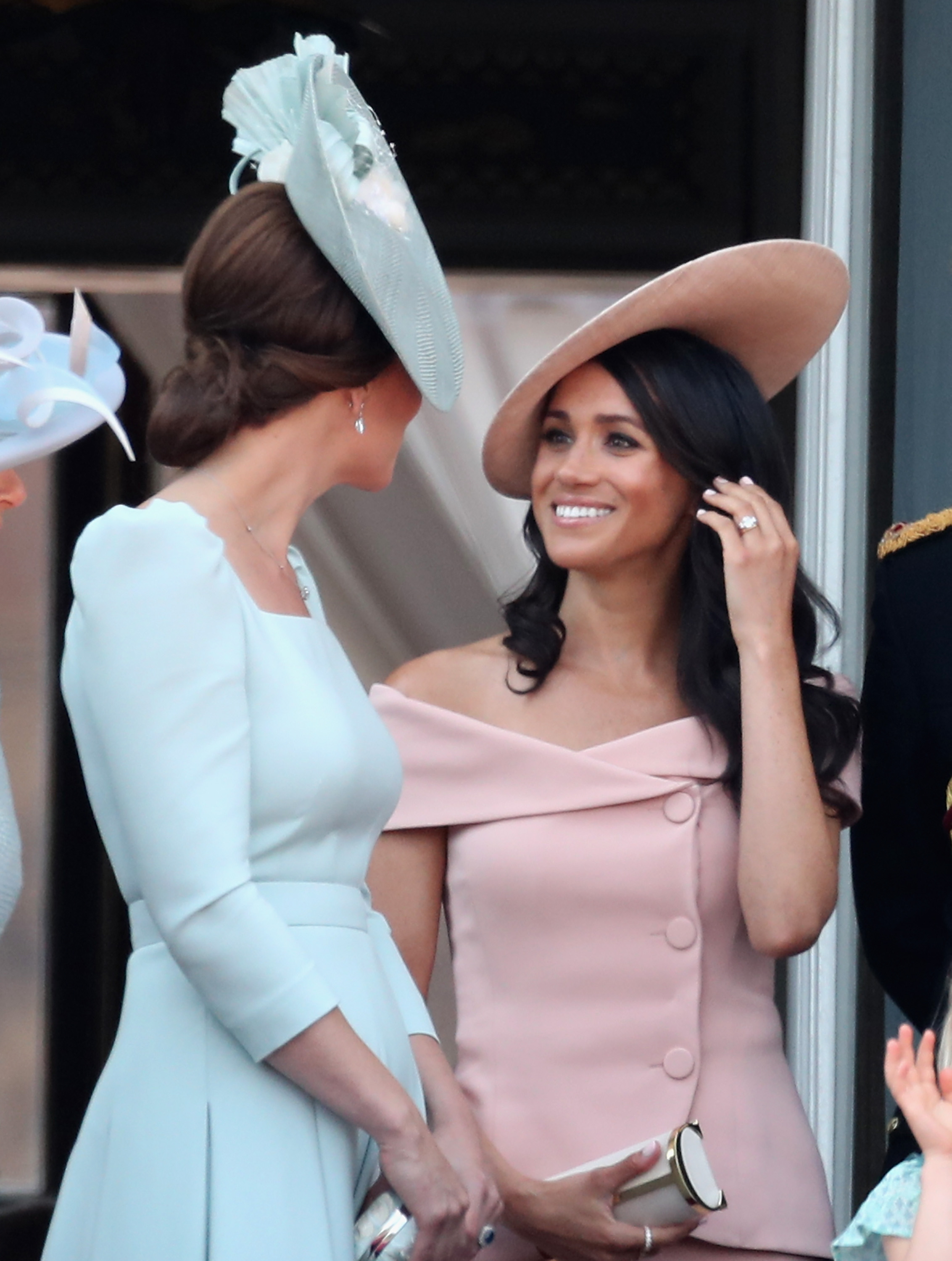 Markle made her first appearance on the Buckingham Palace balcony just a couple of months after marrying Prince Harry, as well as becoming an official working royal. 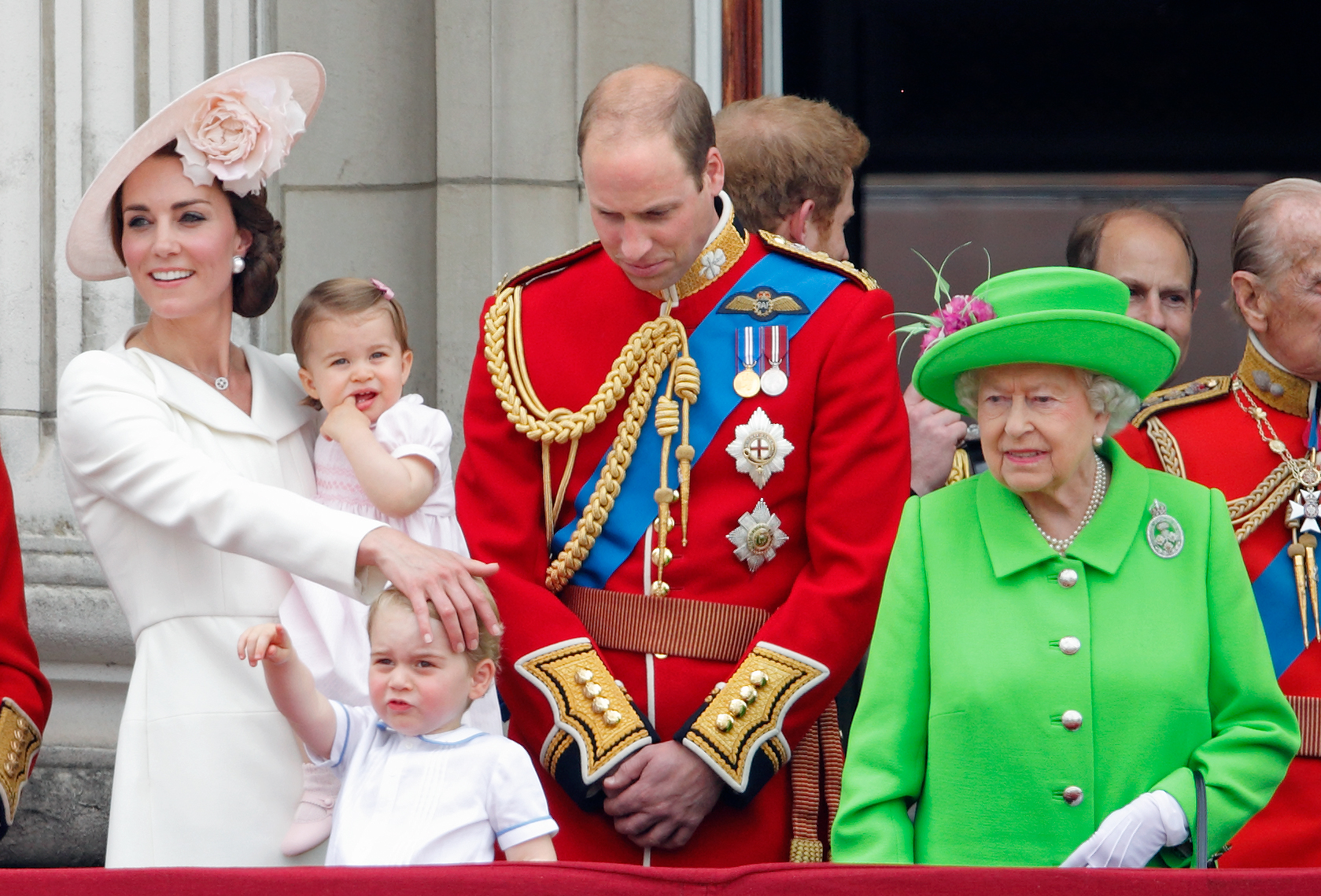 Our favorite little princess, Charlotte, made her debut on the balcony on June 11, 2016, right after celebrating her very first birthday in May. 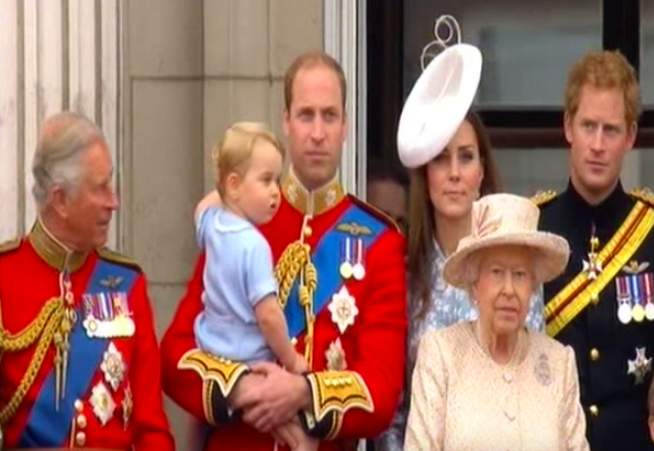 Prince George was still so tiny for the June 2014 Trooping the Colour (just a month shy of his very first birthday!), so the family made the decision to wait until the 2015 event.

Kate attended her first parade in June 2011, after exchanging vows with Prince William in April 2011. 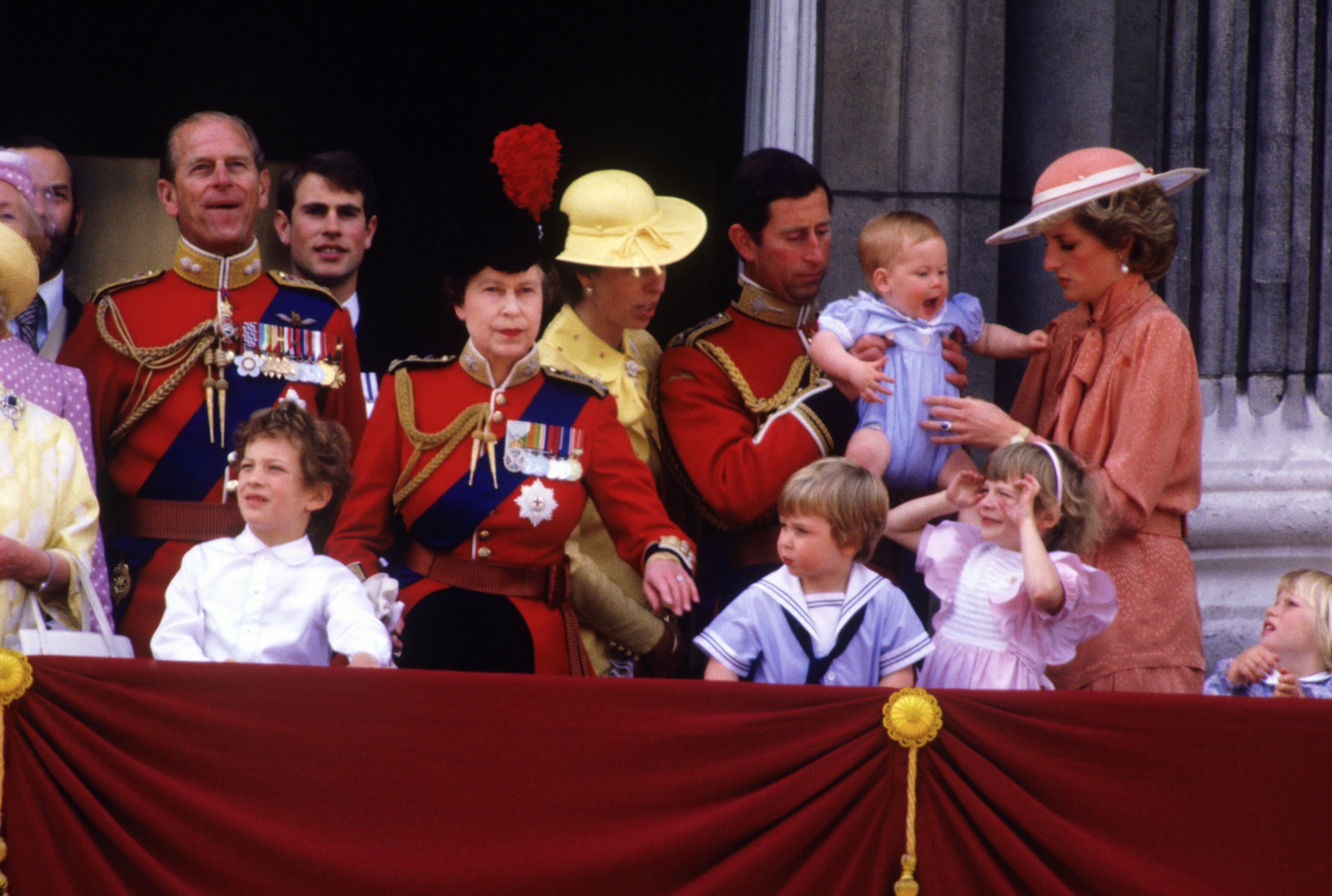 With Prince Harry’s first balcony appearance in 1985, Princess Diana evidently had to play a supporting role!

In 1984, Prince William attended his first Trooping the Colour event. The prince was only two years old at the time, so his father, Prince Charles tended to his tiny tot. 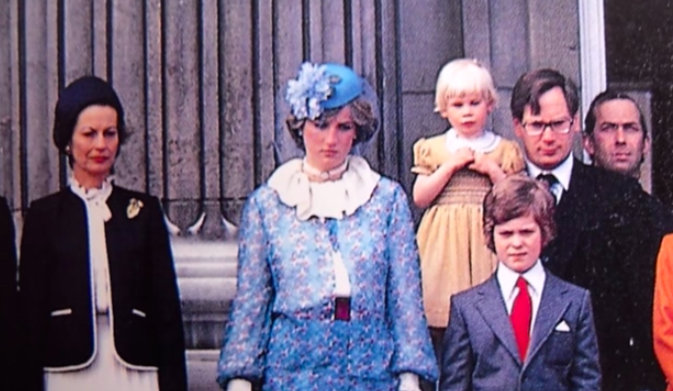 Lady Diana Spencer attended the annual parade for the very first time in July 1981 - ahead of her and Prince Charles’ wedding. 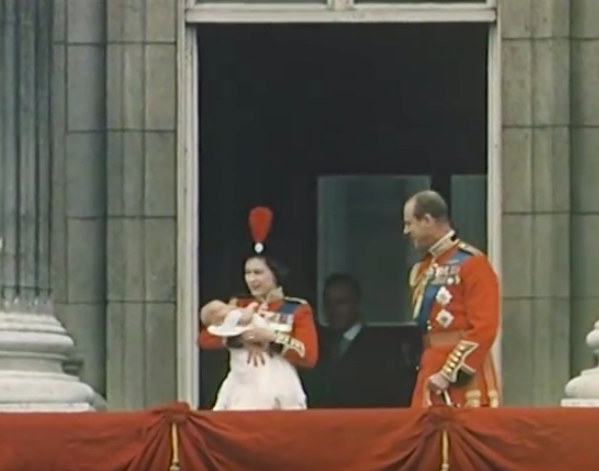 Prince Edward got a particularly early start with the annual tradition when Queen Elizabeth carried the months-old royal onto the balcony in 1964. 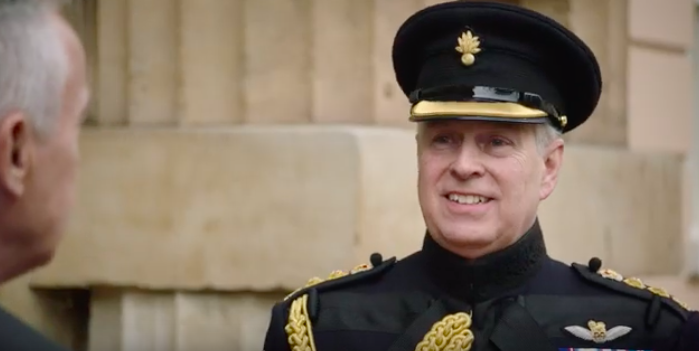 Prince Andrew made an, um ...  interesting balcony debut in 1961 by stepping out barefoot. 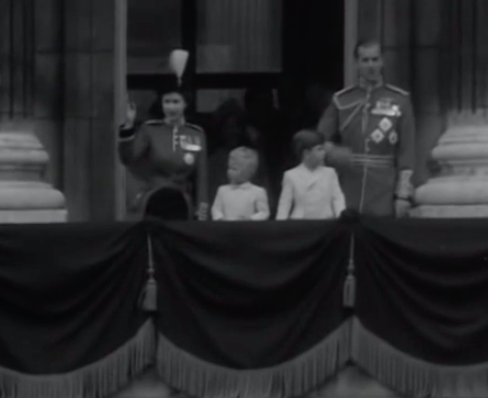 Princess Anne was a few months shy of two years old when went to her very first Trooping the Colour parade in 1953. 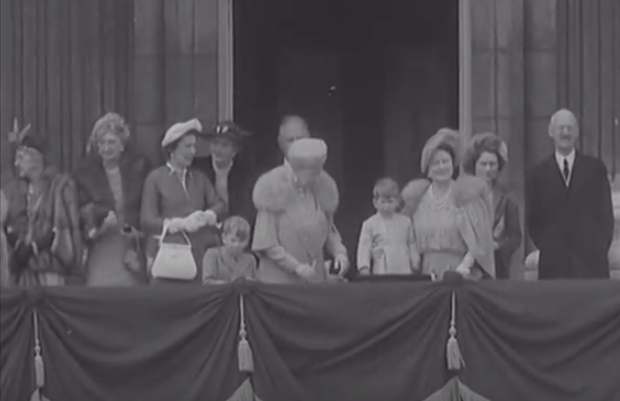 Prince Charles, who’s been attending Trooping the Colour for what seems like forever, made his debut in 1951. As a matter of fact, it was eventful time for his mother, then-Princess Elizabeth, too. She was stepping into her father King George VI’s role since he wasn’t able to attend.

Now that we’ve seen our faves make their debut at one of the biggest royal events of the year, let’s take a closer look at Prince Louis’ adorable outfit similarities with his father, Prince William! Louis is obviously trying to keep the tradition alive, as we saw him recycle one of Prince William’s and Prince Harry’s old outfits on Saturday. Needless to say, the little prince looked absolutely adorable for his first debut, sporting the blue and white ensemble. 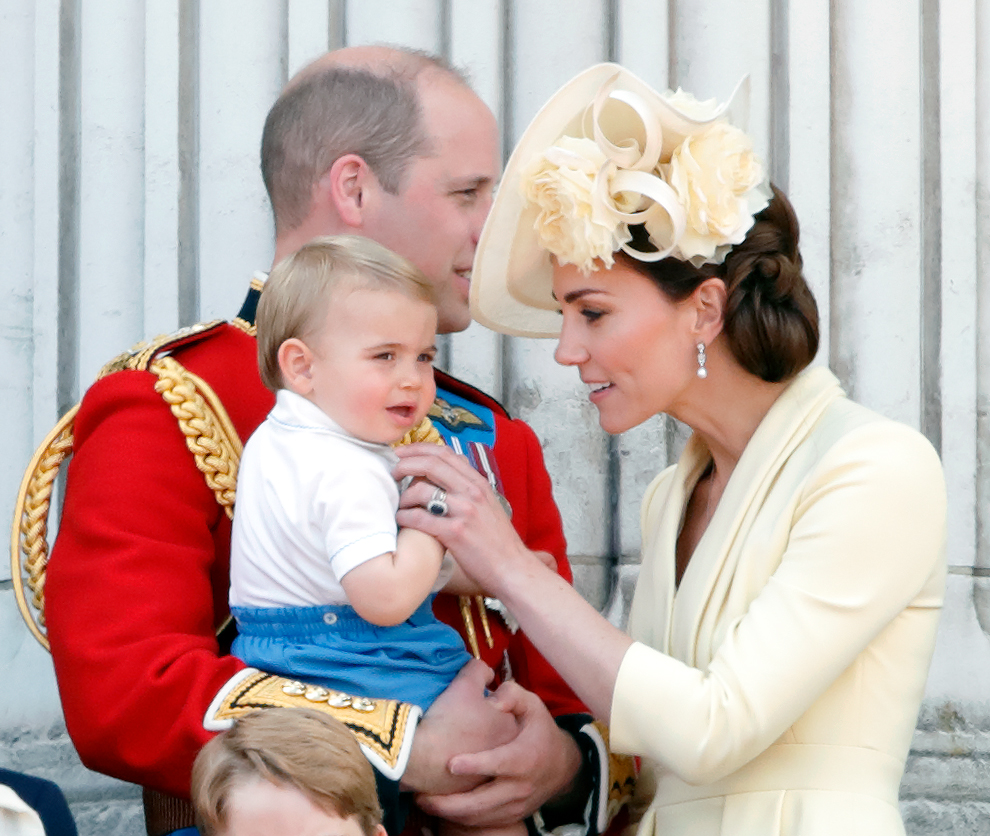 In 1986, Prince Harry wore the exact same outfit for his second appearance at Trooping the Colour! And, honestly, he looked just as cute as his nephew did. Princess Anne supported the tiny prince and held him on her lap, so the little royal can take in the views of all the people that were celebrating outside the palace. However, Prince William was the first one to wear blue shorts and white shirt, with a blue embroidery in 1984, for a trip to Balmoral with his dad, Prince Charles, and his late mother, Princess Diana. 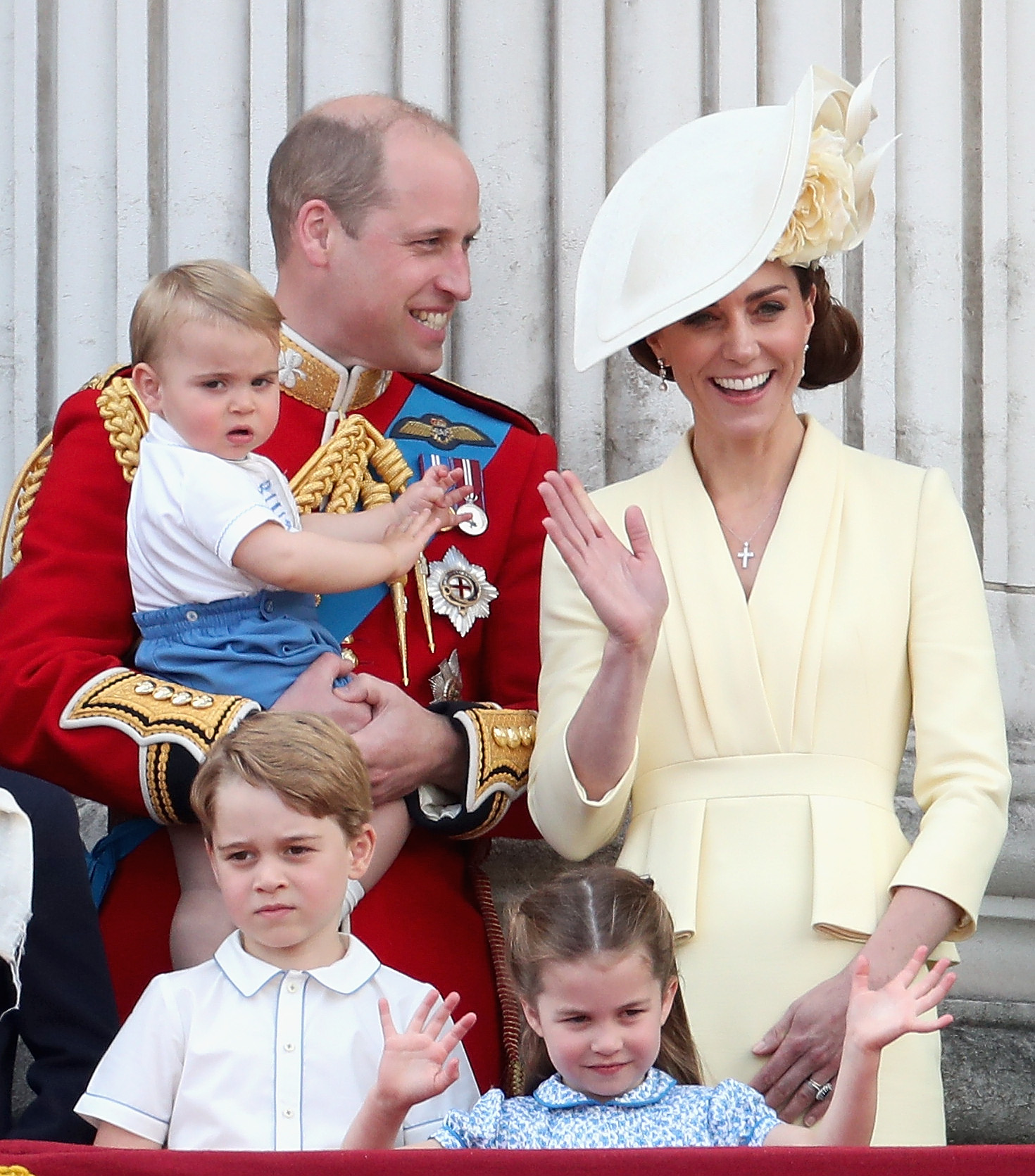 If you tuned in to the event, you’d know that Prince Louis’ first appearance on the Buckingham Palace balcony was a massive success. The young prince looked absolutely mesmerized, watching the amazing RAF flypast. Meanwhile, Kate doted on her baby boy, and bounced him up and down in her arms, with Louis waving to the crowd and skies excitedly!

Prince Harry at his second Trooping 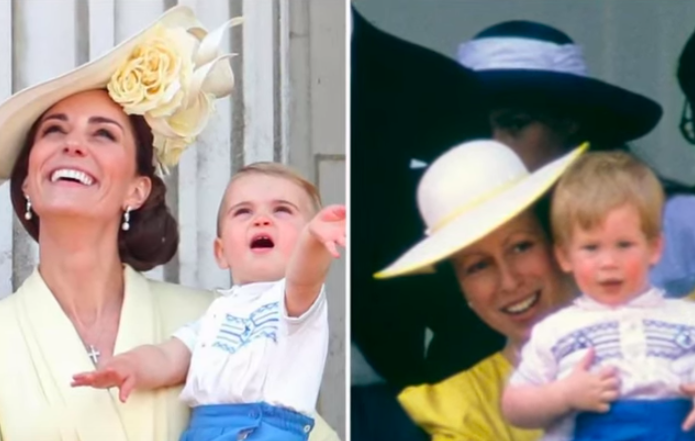 Louis was seen earlier in the day, looking out of a window, curiously watching his parents and the other royal family members come back to the palace after the carriage procession. The tiny prince’s charmingly coordinated his white and blue outfit with Prince Charlotte’s and Prince George’s. 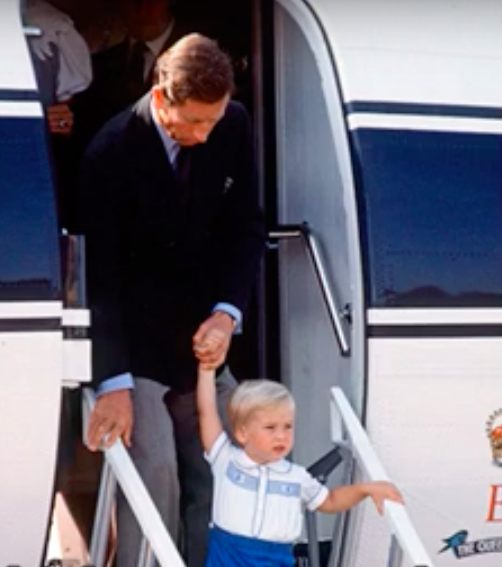 Because of his age, Louis was already expected to make his first debut at the Trooping parade this year. Princess Charlotte was 13 months old when she attended her first Trooping in 2016, meanwhile, George was almost two years old when he made his first debut! Clearly, that meant Louis time had come as well, aged at 15 months old.

The Duchess of Cornwall, The Duchess of Cambridge and The Duke and Duchess of Sussex travel along the Mall to Trooping the Colour, The Queen's Birthday Parade. Trooping the Colour has marked the official birthday of the British Sovereign for over 260 years. Regimental flags of the @BritishArmy were historically described as ‘Colours’ because they displayed the uniform Colours and insignia worn by the soldiers of different units. The name ‘Colour’ continues to be used to this day. The principal role of a regiment’s Colours was to provide a rallying point on the battlefield. This was important because, without modern communications, it was all too easy for troops to become disoriented and separated from their unit during conflict. If Troops were to know what their Regiment’s Colours looked like, it was necessary to display them regularly. The way in which this was done was for young officers to march in between the ranks of troops formed up in lines with the Colours held high. This is the origin of the word ‘trooping’. So, what today is a great tradition began life as a vital and practical parade designed to aid unit recognition before a battle commenced. 📷PA @TheRoyalFamily #TroopingtheColour #HorseGuardsParade #QBP2019

The Queen’s official birthday was celebrated in full force this year! Kate Middleton rode in a carriage alongside the Duchess of Cornwall and the Duke and Duchess of Sussex. Markle decided to take a break from her maternity leave with Archie and attend the big event as well!

And we loved every minute of it - from the carriage ride to Louis’ adorable debut, the Trooping parade is truly an enjoyable sight to see. What did you think about this year’s event? Share your thoughts in the comments!

May 24, 2019
Reportedly Archie Won't Have The Same Opportunities As His Royal Cousins

May 17, 2019
20 Famous Royals When They Were Babies
Popular articles