Prince Harry and his former actress wife, Meghan Markle shared never before seen pictures from their memorable trip to Africa via their official social media page.

Long before their marriage, Prince Harry and Meghan Markle were already a stunning and widely popular people on the internet.

Not only did they make an adorable fit, but they were also known to embark on sweet endeavors like going to Botswana to save animals! 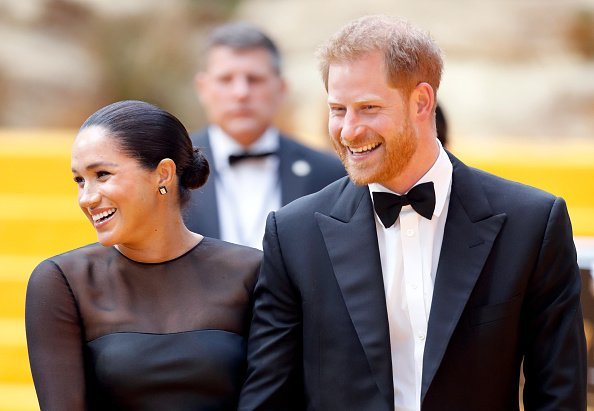 The Duke and Duchess of Sussex during the "Lion King" premiere in London | Photo: Getty Images

Just a few hours ago, the couple, who are now publicly addressed as the Duke and Duchess of Sussex, shared​ snaps from their 2017 Botswana trip. The photos posted left the media in awe of the sweet pair.

There are a total of six pictures, and they are all stunning snaps of the elephants. The trip, which took place a few years ago, had been to the charity organization, "Elephants Without Borders" located in the tropical country of Botswana.

Wishing HRH The Duchess of Sussex a very Happy Birthday 🎂 • ‘Happy Birthday to my amazing wife. Thank you for joining me on this adventure!’ - Love, H Photo©️PA/Doug Peters

Their visit to Botswana had been with the primary aim of assisting Mike Chase, the founder of "Elephants Without Borders." According to the couple, the organization has the primary goal of tracking the Elephants and protecting them from poaching.

It had been a romantic trip for Markle and Prince Harry who were yet to be married at the time. Although photos from the trip surfaced online back then, none of them compare to the exquisite snaps the royals have only just shared with the general public.

🐘🐘🐘🐘🐘🐘🐘🐘 Today is #WorldElephantDay and we are pleased to announce that since we followed our friends at @ElephantswithoutBorders (EWB) on Instagram in July, when we were celebrating the environment, you and our friend @TheEllenFund (@TheEllenShow) have spread the word and EWB have been able to help protect 25 elephants by fitting them with satellite navigation collars! These collars allow the team at EWB to track the elephants, as well as to learn their essential migratory patterns to keep their corridors safe and open so future generations of elephants can roam freely. In honour of this amazing support, EWB have named their most recently collared Elephant...ELLEN! We can’t wait to see where she will go! 🐘 Two years ago on World Elephant Day, The Duke and Duchess of Sussex joined Dr Chase to help in this conservation effort. Below, a few words from Mike and his partner Kelly at EWB: • ‘Today is a day to honor and celebrate the majestic elephant and to make a strong stand for conserving and protecting one of the world’s most beloved animals. elephants are intelligent, sentient beings capable of emotions from joy to grief. They are ‘environmental engineers,’ a key-stone umbrella species, and the fight to save them is in effect, a fight to save entire ecosystems and all wildlife. Today elephants are facing many challenges; habitat loss and competition for resources creates conflict with humans, climate change and fires destroy much needed resources and poaching for the demand of ivory makes elephants bigger targets than ever. African elephants are especially prone to human-wildlife conflict because of their large home ranges. Finding, preserving and creating elephant corridors is therefore of great importance in helping to maintain habitats suitable for movement and minimising human-elephant conflict. Corridors are a mitigation technique to better the livelihoods of local communities and the elephants themselves, by providing environment and ample space for wildlife to navigate from one habitat patch to another, without affecting the livelihoods of communities.’ • EWB - Dr Mike Chase, Ms Kelly Landen . 📸 by DOS © SussexRoyal Additional photos: EWB

The photos captured spectacular moments the pair spent with the beautiful animals. The pictures which are so adorable range from scenic shots taken from afar to sweet close-up snaps of the gigantic animals.

The Instagram update from the new parents also included a lengthy message detailing their work with the charity organization.

They elaborately explained their work with "Elephants Without Borders" and how they have made significant progress while helping.

TRH The Duke and Duchess of Sussex are excited to announce that they have been asked to carry out a tour to Southern Africa this autumn. The Foreign and Commonwealth Office have requested a visit to South Africa 🇿🇦 as well as The Duke carrying out visits to Malawi 🇲🇼 and Angola 🇦🇴. His Royal Highness will also do a short working visit to Botswana 🇧🇼 en route to the other countries. The Duke and Duchess are really looking forward to meeting so many of you on the ground and continuing to raise awareness of the high impact work local communities are doing across the Commonwealth and beyond. This will be their first official tour as a family!

Via the ​caption​, Meghan and Harry shared that EWB helped put tracking collars on 25 elephants since they featured the organization on Instagram last month.

They further shared that the new update on their Instagram feed is to commemorate World Elephant Day today.

Thanks to them, royal fans, as well as the famous talk show host, Ellen DeGeneres' wildlife fund, have reached out to help the organization realize its goals.